Diving each year attracts more and more fans. Once you try the plunge into the water, there is a desire to dive again and again. It is believed that diving is therapeutic but its excitement. However, this is not for everyone. You cannot, for example, to come to the resort to come to the trainers and go straight to sink to the decent depth – it is dangerous to health. Most often accidents occur with untrained people who have entrusted their lives to incompetent instructors or decided on their own to go diving. Diving has the greatest load on the cardiovascular system. Accidents are rare during diving, but most of them are related to the heart functioning impairments. And the older diver, the higher the likelihood of a heart attack during diving. The problem, according to cardiologists, is not that diving is bad for your cardiovascular system, but rather that people who are not even aware that they have heart problems, become involved in the sport. 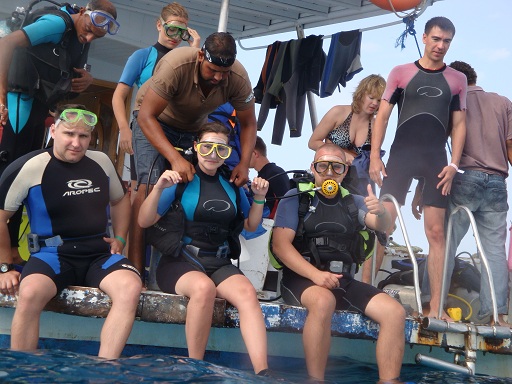 Why diving affects the cardiovascular system

The cardiovascular system of a person is most influenced by diving, as it has a strong influence of the external pressure due to the water. The deeper one dives into the water, the greater the external factors affect his body. This results in poor circulation in the limbs, while in the central part the circulation is maintained at normal levels, due to the physiological structure of the chest, which helps to cope with the external pressure. The normal circulation in blood vessels is not only due to the work of the main pump - the heart, but also because of gravitation, which facilitates the work of the myocardium. There is less gravity in water, so the heart has to work in full force. And this moment the problems in the cardiovascular system may appear which are invisible in normal. Particularly large burden falls on the left ventricle, which is responsible for pushing blood into the systemic circulation. Under external pressure vessels in the peripheral parts of the body are narrowed, and the heart has to do more to push the blood on them. Due to such extreme factors invisible in everyday life heart problems "climbs out".

In diving the organism is also affected by:

Change of temperature. The sharp drop in temperature can cause coronary artery spasm and arrhythmia, which in turn can cause heart attack or cardiac arrest.

Diving reflex. This results in stimulation of the vagus nerve, which slows the heart rate. Blood vessels are constricted (excluding those feeding the brain and heart). This reflex is necessary, especially marine mammals to reduce oxygen consumption. However, in human being occurs all by the scheme but the normalization of pressure, which is often increased due to emotional arousal, resulting in increased load on the heart.

Carotid sinus syndrome. Our brain is supplied with blood by two carotid arteries with sensory sinuses located in the larynx. In diving the external pressure affects these information sites, signaling to the brain. In response, heart rate reflex inhibition occurs, which leads to arrhythmias, weakness and even loss of consciousness.

Fear. This factor is often characteristic of novices, but occurs in pros who perceive new unexplored depths. Fear causes the release of adrenaline in the blood, which stimulates the heart resulting vasodilation. Adrenaline increases heart beating rate and with more force pushes blood into the vessels, also increases respiration. Increased load on the heart leads to arrhythmias and myocardial infarction.

For whom diving is dangerous

Not everyone can afford to dive the bottom of sea or ocean. Diving is contraindicated in the following diseases:

However, if blue abyss attracts you, and you feel that you cannot live without this passion, you have to consult a cardiologist and run some tests before every dive. For example, to check the heart functioning in these situations you can use Cardiovisor that will draw your attention to problems with the heart. 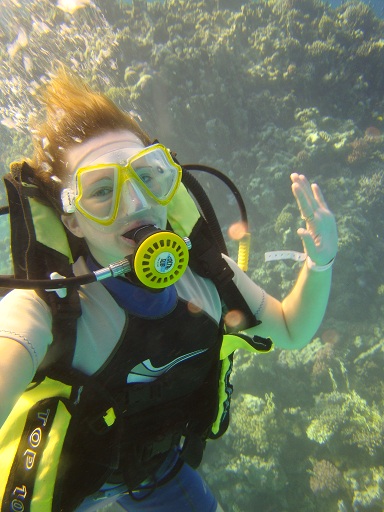 In addition, those who rarely play sports or just does not do any exercise should pay attention to their health before the dive. Regular exercise is very important for divers, as with muscles the cardiovascular system is trained too.

Tobacco smokers and alcohol drinkers also should pay attention to their health, if they decided to go diving.

It is necessary to say that diving does not tolerate carelessness, underwater, requires the utmost concentration. It is clear that alcohol reduces attention, which can lead to accidents. The response speed is reduced too. Psychomotor function is impaired. The smokers can let down not only themselves but the whole group of divers, as the water required fast response. We advise you in choosing an instructor, to pay attention to those who do not have this addiction.

Now consider the physiological effects of alcohol on the body. Alcohol leads to dehydration, which is considered one of the causes of decompression sickness (the formation of air bubbles in the blood). Dehydration leads to blood condensation. The heart has to do more to push the blood through the vessels. Another reason for the negative effects of alcohol on the body is the rapid loss of the diver's heat, leading to hypothermia. The body spends more energy to keep warm. In turn, alcohol will only make matters worse and increase the load on the cardiovascular system, which can lead to disastrous results, such as a heart attack. You should also abstain from alcohol after diving, because alcohol slows down the recovery of heat in the body.

If you decide to go diving, it is desirable to give up drinking for 7-8 hours before the dive. If there is a feeling of a hangover after a "stormy" evening or night, it is better to abandon the conquest of the depths, as the body in this case signals you about dehydration. If before diving you abused alcohol, you should drink plenty of water to restore the water balance. Mineral water is better, because alcohol impairs not only water but also salt metabolism. There is no needing immediately begin to celebrate with alcohol your returning to shore. You should wait for an hour or two, so the body can recover.

Abuse of smoking leads to impairments of the respiratory and circulatory systems. Smokers impaired gas exchange reduces the efficiency of ventilation. Because of nicotine blood of smokers is not as well enriched with oxygen in the lungs, as in non-smokers. Therefore, all tissues and organs do not get enough oxygen. The heart has to exert more effort and more often contract to deliver the necessary nutrition to tissues and organs.

What happens to a smoker-divers? The cardiovascular system, which is already running at high speed, should exert maximum stretch to vital organs can receive their portion of oxygen. For this reason peripheral tissues and organs suffer in smoker-divers. In the periphery, in small capillaries platelets aggregation is observed, which leads to blockage of blood vessels.

Especially dangerous is smoking right before the dive, since nicotine causes the blood vessels to constrict, thus increasing heart rate. Heart muscle needs more oxygen, thus reducing its intake to less important tissues and organs. Carbon monoxide, which is found in cigarette smoke, decreases the saturation of oxygen to tissues, as associated with the oxygen carrier - hemoglobin. Therefore, smokers need more effort to accomplish the same thing, than nonsmokers.

It should also be remembered that smoking causes a number of cardiovascular diseases, which are often detected in stressful situations, and diving is no exception. There is impairment of the cardiovascular system as

Remember that the overload experienced by the smoker while diving, greatly increases the risk of heart attack. Besides the wrong gas exchange, which occurs in smoker-divers, leads to irreversible damage to the respiratory system.

Diving and disorders of the cardiovascular system

But do not despair; hypertension is often possible to win with regular physical activity and diet. In some cases of essential medicines are necessary for the treatment. 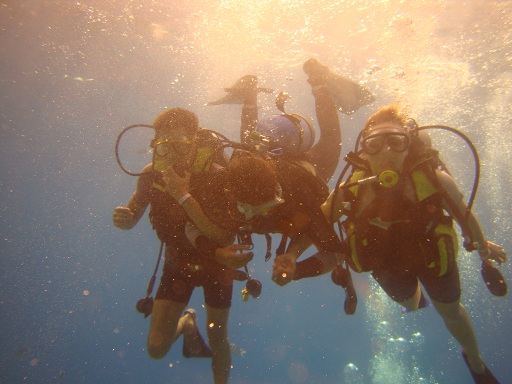 The heart does not receive the necessary substances from the blood because of circulation disorders in the coronary arteries, which is often associated with the deposition of cholesterol on the walls or other particles. The result is a blockage of blood vessels. Many factors contribute to the development of coronary atherosclerosis: a diet high in fat and cholesterol, smoking, hypertension, age and family history.

The diving is contraindicated if you have symptoms of heart disease. The classic symptom of coronary heart disease is chest pain that often occurs due to physical exertion. Unfortunately, many people do not have symptoms before they have a heart attack. Therefore, diagnosis of the heart is recommended before diving.

Because of this pathology the left ventricle has to function forcedly to pump the necessary amount of blood into the systemic circulation. People with mitral valve prolapse may have absolutely no symptoms or signs of disease. Of intermittent palpitations, abnormal sensations in the chest, associated with a beating heart, chest pain. There is a risk of stroke or loss of consciousness.

Abnormal heart-beating leads to circulatory problems. Arrhythmias can occur during diving in any person and result in loss of consciousness. For people who often have arrhythmia, it is necessary to give up diving until you passed a thorough examination by cardiologist. Some types of arrhythmia do not bun the diving.

Results in mixing of arterial and venous blood due to the holes in the septa between the heart chambers. If the hole is small, the pathology is not severely hampered normal life, but big sized holes can be treated surgically. During diving, especially in deep water, the danger lies in the fact that the venous blood from the lungs with gas bubbles formed in the blood when diving to great depths, can get into the systemic circulation and affect blood flow, such as in the brain or kidneys.

The effectiveness of blood flow to the extremities, the fingers and toes may be decreased in person with the disease. The main problem is that the blood vessels constrict in a patient in response to cold, stress and other factors. The disease can manifest itself with such pathologies such as rheumatoid arthritis, scleroderma and lupus. Raynaud's disease is a threat to divers, as during diving functioning of the limbs may be reduced, especially if you have to dive into the cold water. As a result, pain is possible. It is recommended to dive in diving suit and gloves.

Heart surgery, including valve replacement, is a serious obstacle to go diving. Blood in divers becomes condensed, and anticoagulants are necessary to avoid the formation of clots in the artificial valve. However, when diving be careful so as cuts, such as corals, may result in significant blood loss. Doctor’s consultation is required.

If you decided to go diving, remember that it is necessary to monitor the functioning of the cardiovascular system. All professional divers regularly visit cardiologist. Also the amateurs should see a doctor, especially in their first dive. There is lot of time, between medical check-up and results obtained: sometimes days, sometimes weeks or months. During this period some problem with the heart may occur, which does not manifest itself in ordinary situations. So it is good if the cardiologist can see right before the diving. In this case, check the heart functioning by using Cardiovisor device that can detect problems in the myocardium in all conditions. This device will allow you to have peace of mind to start the dive and avoid the dire consequences that could bring the cardiovascular system in extreme situations.

Successful conquest of the deep sea!