Cardiovisor - device for measuring electrical microalternation of ECG. Control of ECG microalternation (first of all microalternation T-wave) - is  new not invasive method  to control electrical instability of myocardium.  This method  is appeared 20 years ago and named «method MTWA» (Antonis A. Armoundas, Gordon F. Tomaselli and Hans D. Esperer Pathophysiological basis and clinical application of T-wave alternans // Journal of the American College of Cardiology.- 2002; 40; p. 207-217.). Similar devices are radically different from standard ECG-analysers and interpretive cardiographs. These devices don't measure and don't analyse morphological characters of ECG waves (loop analysis). These devices measure and analyse microscopic «vibration» ECG wave. Microalternations are calculated as low-amplitude fluctuations of ECG wave in successive heart beat. Amplitude of microalternations is an order of magnitude smaller than amplitude of standard ECG waves. During T-wave analysing, middle amplitude of microalternations is 2…15 microvolt, but initial amplitudes of T-wave is 200…700 microvolt. 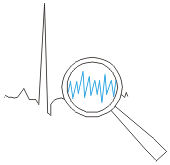 Group of devices for measuring ECG microalternations symbolically consists of two subgroups. First subgroup measures microalternations of T-wave. Second subgroup -  measures T-wave microalternations + QRS-complex microalternations. Technology of first subgroup is implemented in some devices. Technology of second subgroups is implemented only in Cardiovisor. Cardiovisor is the only serial device odf second subgroup. These subgroups are significantly differ as they are addressed.  Devices of first subgroup are used on problem patients diagnostic for risk of malignant arrhythmia estimation. Most famouse manufacturer of such devices  are american companies Cambridge Heart (“СH2000”) and GE (“GE Marquette”), and also germany company MS Westfalia GmBh (“Case”). Measuring instruments of T-microalternations are either the main function of the device (CH), or the option (GE). The measuring procedure is associated with a load test and prolonged enough in most cases. Cardiovisor device by a higher signal / noise ratio can be measured microalternations, even at rest in a very short time. Therefore, the main area of ​​use it - screening tool for early detection of progressive changes in the heart, and operational monitoring of the myocardium.

Chronologically Cardiovisor is one of  the most recent developments in the group of microalternations measuring instruments, and differs the effective filtering system of hums based on «a method of dispersion mapping». Cardiovisor designed for express examinations, and requires only the signals from limbs leads with 4 electrodes, which are recorded at rest for 30 seconds.

Measuring instruments of ECG microalternations are devices which provide new instrumental information on the minor changes of myocardium electrical activity which other methods cannot detect. Average microalternations amplitude even at physiologically normal myocardium are highly sensitive indicators of total influences of numerous physiological systems of the organism which participate in mechanisms of heart regulation. For example, Cardiovisor reacts on subthreshold metabolic changes which disturb synchronism of electrical excitation of ventricular myocardium, microscopic changes of the ionic balance in myocytes, small shifts of sympathoadrenal activations and other metabolic changes which are not evident in ECG morphology or echocardiography signals (US of heart) due to small value. Similarly, Cardiovisor reacts to latent dynamics of compensatory response of a left ventricle that allows to see a state of heart overload  objectively and in time.

Principal result of high sensitivity of the device Cardiovisor is that it provides detection of steady negative changes at early stages of diseases, long before the changes will be identified by other instrumental researches or changes will manifest subjectively. Cardiovisor it is oriented not on diagnosing of a pathology type , and it is intended for early detection of electrophysiological changes which conduct to a different deviation from norm or a developing pathology.

Biophysical bases of the  dispersion mapping method  and  principles of Сardiovisor operation  are published  in a separate section of the book  “New methods of electrocardiography”, edited by S.V. Grachev, G.G. Ivanov, A.L. Syrkin // Moskow, Technosphere, 2007.–552 с. ISBN 978-5-94836-114-7. This section (in russian language) can be downloaded for personal acquaintance here.